My parents, James Donald Stein and Irene Emma Mossey were married on Saturday, 30 January 1943, in Springfield, Massachusetts. Here is my mother’s recollection of her wedding day and honeymoon:

In February, 2001, Mom related the story of her wedding to me: 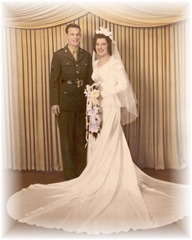 He took religion lessons from the chaplain so we could be married by the priest in St. Michael’s Cathedral. There was a blizzard on Jan. 28th,  the day he left Jacksonville, Florida, to come home. The train stopped in Philadelphia because of the snow. He finally got another train. He arrived home that night about 9pm.
Annemarie Bailey and I trudged thru the hip-deep snow to meet him at the train station because there were no buses running right then because of the snow. It took us about one and one-half hours to get to the station in downtown Springfield. The next day, we spent almost all day running to and from the courthouse and judge’s chambers to get our marriage license. We couldn't get it until Dad arrived home and we had to get special permission because we had to dispense with the waiting period. We finally found a judge who was available to sign the paper.
We were to be married the next morning about 10am. We arrived at the chancellery and the bishop was out of town and had not signed our dispensation to be married because Dad was not Catholic. He was expected back by  noon. I had really wanted to be married at noon. It was awful waiting. They did not marry after 12pm at that time, so Father married us and said he would explain to the bishop. The bishop did not get back before noon. I cried through the whole ceremony.
We had a lovely reception at my parents’ home on Marion St.  My Aunt Adis baked the two-tier cake (apple sauce) and her husband, Uncle Dub, decorated it. He had worked at a bakery at one time or other. I had a soldier and bride on the top. It was beautiful. We had pictures taken at the studio and then went home for the reception.
It snowed and then we had sleet. We left for New York City around 5pm. While we were sitting on the train waiting to leave, some of our friends walked thru and covered us with confetti. We had to sit like that for three hours on the ride to NYC.
We went to the Chesterfield Hotel (no longer there) and our reservation was given away because we were late arriving. They gave us another room on the 12th floor which was very nice. We had breakfast served in our room the next morning. We did some shopping, sightseeing and window shopping. We visited the NBC building and toured it. They were interviewing people on the new invention-television. I was picked to be interviewed. It was real neat and Dad was so proud. We stayed there for four days and spent the rest of his fifteen-day leave between his parents’ home and mine.”

BELDIN Family Alliances: From Then Til Now 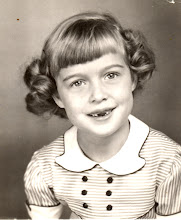